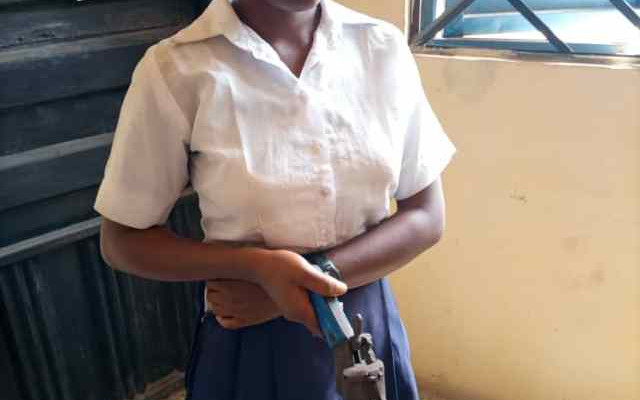 A female student (names withheld) has been apprehended by the authorities of Government Secondary School, Ikot Ewa, Akpabuyo Local government area of Cross River State for unlawful possession of a locally made pistol. The student who Vanguard learned was in SS2 Arts class in the school was cautioned by one of her teachers to cut her hair because the colour of dye on it was inappropriate and prohibited.

Further findings also showed that she came to school on a faithful day with the intent to shoot the Vice -Principal. When contacted, the Principal, Mr Inyang Inyang declined to make any comment on the matter as he was not authorized to speak to the press. However, an impeccable source at the school who didn’t want his on print told Vanguard that the student had been under watchful eyes of the school authority because of some unusual character traits she exhibited.

“From inception, I noticed the way she greets and we decided to take a closer look at her personality and activities in school. ,” On the said day, she was asked by a teacher to go cut her hair because she dyed during the festival period(December ), the teacher also confiscated her sandals, so that after cutting the hair she would pick them up. ” But after she had cut the hair she came to show the teacher and then get her sandals back, but we decided to calm her down because she was started becoming rude and we said she wanted to see the principal. “When she got there, the principal tried to calm her down, but when she got talking, we discovered she was heavily drunk with alcohol ( Captain Jack ) , she was not stable at all. ” At that point, her bag was searched and a very expensive gold plated phone, gold necklaces including a locally made pistol were recovered, and she confessed that it was given to her by her “man-friend ” with who she has been having an affair with,” the source revealed.

However further findings by Vanguard showed that the girl’s boyfriend who allegedly gave her the pistol is in his late 60,s and has been the one influencing the teenager. A source close to the family told Vanguard that the supposed “man-friend” notorious cultists in his late 60s have also been sleeping with the girl in their house because she has her own room. ” The boyfriend who gave her that gun is not a middle-aged person but an elder in his late 60s, sometimes when they play masquerade, the girl holds the gun for him in her bag for him.

” The mother is aware of what her daughter was doing with the old man, she( the mother) is even claiming that since her daughter started dating the old man, she has been calm and non-violent. “But I must tell you she is a bright child with great potentials if she can be properly guided, I think the problems is at the family level, her mother has not been the best mother any young girl could wish for,” he said. Some of her classmates who spoke on the condition of anonymity told Vanguard that she came with the intention to shoot the Vice Principal because she was asked to cut her colour hair or dye it back to black. ” She was very drunk and oozing of alcohol, she was actually smelling like a skunk that day, mumbling things like; ” I will deal with that vice principal ” before she was allowed to see the Principal who discovered the gun and other items in her school bag. “She comes to school regularly but she doesn’t attend class always, she is quiet too, but sincerely, as a person, I believe she is under the influence of alcohol because she is not a violent person, and she is a brilliant student,” her classmates said. When contacted, the Army Public Relations Officer, APRO, Cpt. Everest Ochinta said the army doesn’t prosecute adding that she will be handed over to the appropriate agency for further findings and prosecution.