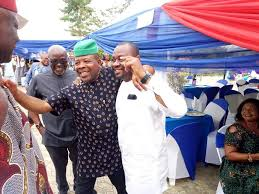 Betrayals, disunity, mutual distrust, and backstabbing appear to have started diffusing the clamour for a president of Igbo extraction come 2023 going by signals emanating from the zone.

specifically, vested interests, as well as the lack of synergy/unity of purpose among political elite from the region, many insist, would be Ndigbo’s greatest undoing as far as South East landing the plum job is concerned.

Within the last two weeks, three stakeholders’ meetings have taken place with each of them glossing over critical issues relating to making the aspiration feasible.

The separate meetings brought together different camps aligned for dissimilar purposes, such that each group was seen as working across purposes with the other regarding the Igbo presidency project.

Peeved by the attempt to railroad them into the bi-partisan meeting convened by the Senate Chief Whip, Senator Orji Uzor Kalu, the southeast Governors Forum (SEGF) led by APC chieftain and governor of Ebonyi State, Chief David Umahi, declined attendancance While the governors boycotted the zonal bi-partisan meeting, they held a zoom conference where they not only dissociated themselves from the Igbere parley, but also condemned the inclusion of their names as conveners when they were not invited to the meeting

The governors’ standoff energised speculations that the bi-partisan meeting was a scheme by National Assembly members from the zone to chart a different path to the Igbo Presidency, even as sources alleged that the meeting was Kalu’s scheme to promote a possible Ahmed Lawan Presidency that would have him as vice-presidential candidate.

In the notice of the meeting, Kalu, former Deputy Senate President,

Ike Ekweremadu, and governors of the five South East states were listed as conveners.

According to the organisers, who disclosed that the meeting was to kick off by midday, the event was to provide a platform for members of the APC, PDP, APGA, and other political parties to put their ideas on the table.

HOWEVER, Umahi, who spoke to journalists shortly after the virtual meeting, explained that the governors were not part of those that planned, or convened the bi-partisan meeting, and regretted that their names were included as conveners without their permission.

“The Governors of South East frown at such attitude and would want to disassociate themselves from such a meeting. If there should be such a meeting, which they feel is very necessary, the governors must be seen to be informed and be part and parcel of calling such a meeting. They strongly feel that Ohanaeze is in a position to speak on such issues.

“So, they want to say that the governors are not involved and they encouraged all their people to boycott such a meeting,” he stated.

Besides the South East governors’ grouse, some stakeholders in the zone are suspicious that the meeting was far from actualising the dream of the South East, but limited to the personal political interests of the conveners.

The aggrieved stakeholders equally question the wisdom behind holding such an important meeting at Kalu’s residence, and not in one of the government facilities scattered across the zone. Additionally, they also question the failure to carry along several other leaders in the zone.

“I am not an apostle of doom, but I have my sincere doubts about the intentions of those who convened the Igbere meeting. If they were not interested in what they would personally gain, I doubt what could have prompted them to call the meeting,” Chief Ikechukwu Okonkwo, a social critic said, adding: “The truth is that none of them is interested in becoming president. They will prefer to play behind another candidate and that is the sympathy they are trying to build in the guise of asking for an Igbo president. It is such that, if we are not careful, we may end up achieving the vice-presidential slot in 2023 as a result of the activities of our leaders.”

Okonkwo cautioned the people to be mindful of what he described as “mad rush” into the ruling party by southeast politicians, stressing that, “each of them that has moved from one party to another has done so because there is a promise of what to become in 2023.”

Justifying his position that those at the Igbere meeting had only a personal agenda to push in 2023, he said: “How come none of them has indicated interest to vie for the presidency? How come they are waiting until political parties cede their tickets to the South East? Has Tinubu hidden his intentions to run in 2023? Has he not been engaging in consultations across the country? It may even interest you to know that the assemblage may have people working for him.”

He continued: “Time has come for Ndigbo to decide what they want from the country. It is these leaders that we are looking up to lead the way and position Igbo appropriately in the scheme of things. The earlier they realise that they cannot play second fiddle forever, the better for the people of the southeast zone.”

BUT for the National Coordinator of the southeast for Presidency 2023 Movement (SEFORP2023), Rev. Okechukwu Obioha, more of such meetings should be encouraged as “it has made the campaigns of our group lighter.

“We are thanking Kalu for premiering this wonderful meeting and thanking the leaders for accepting the message that SEFORP has been propagating in the last two years. That meeting has put a cap on efforts that we have made so far and has given us confidence that our labour has not been in vain, and if our people have accepted us, then we can now launch out fully.”