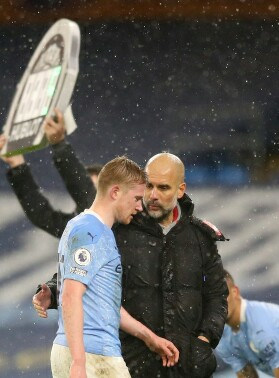 De Bruyne Out For Six Weeks With Hamstring Injury

Kevin De Bruyne has been ruled out of action for four to six weeks with a hamstring injury, Pep Guardiola has revealed.

The Belgian star will be sidelined for a vital part of the season, missing crucial clashes against Liverpool and Tottenham.

The 28-year-old has been in superb form this season, netting three goals and adding ten assists in 17 Premier League matches.

He was forced off an hour into the 2-0 victory for his side against Aston Villa.

De Bruyne will miss the huge trip to champions Liverpool at Anfield on February 7, as well as the visit of Tottenham six days later.

He is also likely to be absent for the game at Arsenal on February 21.

“It’s a big blow, isn’t it? It is but we have to move forward,” said Guardiola, ahead of Saturday’s trip to Cheltenham in the FA Cup.

“I’m not saying anything that anyone doesn’t know, it is unfortunate for him and for us and we have to find a solution because everyone in their own life is struggling in the situation we are living and we have to adapt.”