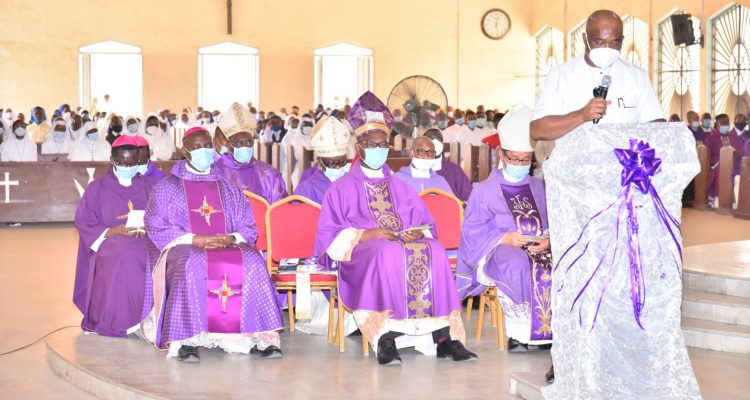 The Governor said Monsignor Madu’s passing was shocking, sudden and sorrowful, but noted that nobody can “question the will of God who is the author and finisher of all human lives.”

Governor Uzodimma said that lateMsgr. Madu left a lot of accomplishments that “challenges we the living to see his lifestyle as a pointer to what we are supposed to emulate so that when we leave this world we will not only be mourned but the living will celebrate our achievements.”

The Governor severally described the late Msgr. Madu who was the immediate past Secretary General of Catholic Secretariat of Nigeria as a “gold fish that had no hiding place”, recalling that the deceased achieved and accomplished a lot in every position he found himself.

Governor Uzodimma said within the short period Msgr. Madu worked as the Government House Chaplain, he impacted the lives of many people who came in contact with him both spiritually and physically.

“The very short period he was the Chaplain, he made a lot of impact on both the Chaplaincy and the Government House Population,” Governor Uzodimma explained and described him as “an achiever, goal-getter, friendly and accessible as well as a bridge builder who did a lot to expand the word of God.”

In his Homily at the funeral mass, the Catholic Bishop of Aba Diocese, Most. Rev. Augustine Echema described the late Monsignor Madu as “a big brother, a builder, an achiever, and friend of all, both small and great, poor and rich, who is most illustrious and trust worthy priest of the Catholic Communion.”

Bishop Echema said that as a Priest, “the lateMonsignor Madu was a genius who had solution to almost all human problems that come before him.”

While he said his death reminds us again of how meaningless life can be, the bishop consoled all affected by his passing and prayed for the repose of the soul of Mosignor Madu.

The Catholic Bishops Conference of Nigeria represented by Bishop Lucius Ugorji of Umuahia Catholic Diocese and Administrative Bishop of Mbaise Catholic Diocese reiterated that lateMosignor Madu was a Priest who gave his best in every position he occupied while alive. He said the late priest “worked with integrity” and that “he will be missed by many and never forgotten.”

In their oration, the Presbyterium of Owerri Catholic Archdiocese said: “Monsignor Madu will be greatly missed for his passion for Church development and community empowerment, his inspiring affability and tactical diplomacy, his high sense of humour and big-heartedness, his wise counsels and educative publications and his outstanding pastoral solicitude towards the members of the Knight of St. Johns International, whom he served as spiritual director at different levels for over twenty five years.”

In his word of appreciation to all who attended the funeral Mass even at short notice, the Archbishop of Owerri Catholic Arch Diocese, Most Rev. (Dr.) Anthony J V Obinna acknowledged that everything that played out from the time of Monsignor Madu’s sickness to the burial was circumstantial.

He appealed to those who bear grudges of not being carried along to forgive and forget, and rather join everyone in prayers to entrust the soul of late Monsignor Madu in the hands of God.

Also in attendance were ministers, serving and former lawmakers, including Senator Victor Umeh, prominent businessmen and politicians among them, the Imo State Chairman of the All Progressive Congress (APC), Barr. Marcom Nlemigbo and Chief Tony Chukwu.

Earlier on Thursday, a Requiem Mass and night of tribute was held in honour of Rev. Monsignor Madu at the Government House Chapel and it was also well attended, with Governor Uzodimma leading others.