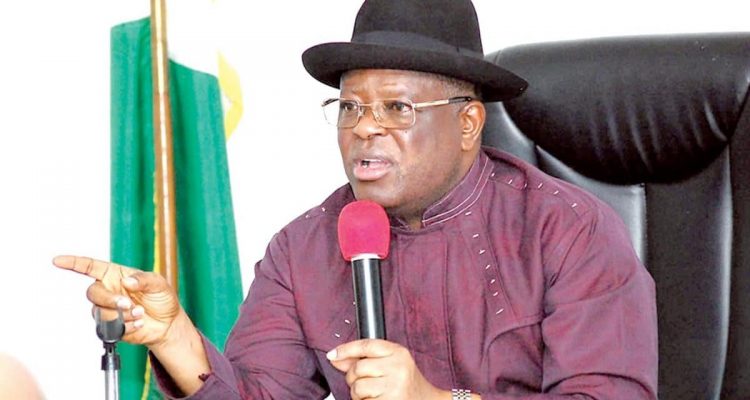 How we were sponsored by Umahi to destabilize Ebonyi PDP – Ogazi

A factional executive of the Ebonyi State Peoples Democratic Party, PDP, Mr. Ogazi Linus Ogbonnaya yesterday confessed to being sponsored by governor, David Umahi to destabilize the party in the state.

Ogazi who was a member of the Onyekachi Nwaebonyi faction said he was dumping the excos to join forces with Elder Fred Udeogu caretaker committee to reclaim the structure of the party from Nwaebonyi.

He vowed to never again be a part of the people destroying the party in the state.

He made this known while speaking to journalists in Abakaliki, in Ebonyi State.

The former assistant secretary noted that it is uncalled for, to destroy PDP which according to him, has benefited him and many Ebonyians.

“The matter was that we were angry over our dissolution by the national executive council of our party. So, midway we started attending court, we were sponsored to go to court.

“We discovered that the efforts so far, and the money being spent by the person sponsoring us is not meant to reinvigorate PDP in Ebonyi and it was meant to destroy the party.

“The struggle to reclaim the structure of the party was not for the growth of the party. It was for destruction and nobody coerced me. I joined the process as a demonstration of our dissolution

“Engr. David Umahi was the one sponsoring us to go to court, and that’s why his elder brother was the second leading counsel to the legal tussles and it is not hidden.

In a swift reaction, Governor David Umahi who spoke to journalists through the Special Assistant on Media, Francis Nwaze denied the allegation, noting that the governor has joined the All Progressive Congress, APC, and had no time to interfere with affairs of his former party, PDP.

He said: “The present leadership of the State under Governor Umahi operates on the tripod stand of the ruling All Progressives Congress, APC, hence it left the PDP three months ago and has no hand whatsoever on the travails which have further depleted the vestige of the once populous party in the State.

“For clarity, the Governor at no point threatened anybody or a group of persons over the raging PDP face-off nor engineered any violence against the PDP and couldn’t have contemplated such having left the party with the full complement of the leaders of the state some months ago.

“It is therefore senseless that instead of trying to find solutions to internal disharmony bedeviling the party in the State, it is only hell-bent on casting aspersions on the Government of Governor Umahi over issues it knows nothing about.

“Therefore, I enjoin Fred Udogu and the meagar remnants of my former party people at the state level to focus on their party and desist from any character that is capable of causing disaffection among Ebonyians. Let Governor Umahi be.

“I, therefore, implore the general public to disregard the spurious allegations of the PDP which reflect in its entirety the figment of the imagination of the authors and treat the same as such” he added.