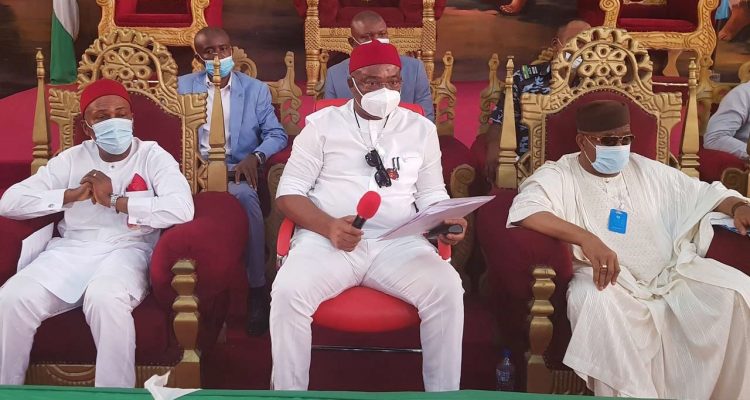 • Southeast APC seeks unity
All hopes that leaders of Southeast geopolitical zone would play as united team towards the 2023 general election cycle were shattered yesterday, when stakeholders from the zone met in Owerri.

The stakeholders resolved to do all in their powers to win the forthcoming Anambra State governorship poll, even as they harped on the need for conscientious membership registration and reconciliation of party structures from ward to state levels.

In his remarks Governor Uzodimma said APC in Southeast had all it would take to dominate the zone, stressing the need for unity, brotherly love and genuine reconciliation.

He noted that the Anambra governorship poll was the ground to demonstrate the resolve of the party to capture the zone. He therefore appealed to members to shelve petty animosities and antagonism to work towards winning the election for the party.

“I believe that winning Anambra governorship will make the party stronger in the zone. And we can only succeed in doing this through genuine reconciliation and unity among members of the party,” the governor stated.

The governor regretted recriminations among party members in the zone, stressing that such grievances constitute the major problems confronting APC, just as he noted that the process of reconciliation should begin immediately to strengthen and fortify the party for future elections in the country.

His words: “The problem confronting APC in southeast is grievances, and we must begin today to address it, this will help our party, we need to reconcile all aggrieved members, our party would be stronger and we also urge all of you to help secure victory in Anambra.”

Also speaking, the Minister of Science and Technology, Onu, affirmed that Southeast people are yearning for APC, assuring that it was for “this reason that APC would win the forthcoming Anambra State governorship election.

Former President of Senate, Nnamani, informed the stakeholders that registration will commence from the unit levels, where members will cast their votes, stressing that the process will enable the party to actually know its strength at every unit.

Nnamani therefore pleaded with members to take the registration seriously just as he urged party faithful to immediately take part in the process.

Speaking through his representative, Senator Agbo, Umahi said he was happy to be in “the midst of progressive members of the party in the zone.” He disabused the minds of members, especially those who said he was not in good terms with his Imo state counterpart, assuring that he would work with Uzodimma to make sure other governors join APC from the zone.

MEANWHILE, Igbo leaders, yesterday, restated the call for the next President to emerge from South-East.

They spoke at a Solidarity Conference organised by Global Movement for Igbo President 2023 and United for Better Nigeria Initiative. The conference focused on the emergence of an Igbo President.

In his opening address, a First Republic minister, Chief Mbazulike Amechi, expressed the hope that the emergence of an Igbo man of South-East zone as President would resolve leadership crises in the country.

A former Women Affairs Minister, Josephine Anenih, said the Igbo believe in one Nigeria in spite of deprivations and provocations, saying it justifies the need for an Igbo President to address the myriad of challenges confronting the country.

The chieftain of the Peoples Democratic Party (PDP) said the conference was part of efforts to consult widely towards ensuring that every Nigerian supports the quest by the region to produce the next President.

Similarly, the National Chairman of African Democratic Congress (ADC), Chief Ralph Okey Nwosu, stated that being one of the six zones in the country, “it is not out of place if Igbo or South-East comes up that it is their time to rescue Nigeria.”

He appealed to Amechi to ensure realisation of the dream of Nigeria’s founding fathers.

Igbo youths were not left out in the agitation as the National President of Ohanaeze Ndigbo Youth Wing, Arthur Obiora, said 2023 President must be an Igbo man.

Obiora, represented by the Director of Planning and Strategy, and leader of Igbo Young Politicians Forum, Tony-Ezekwelu, an engineer, said:
“We are not begging anybody, Igbo man must be President come 2023.

He urged political parties to zone their 2023 presidential tickets to South-East.

“If they want us to remain as multi-ethnic nations that Nigeria is, we will remain and build Nigeria as a country where there is peace, justice, equity and fairness.

“We are not begging anybody, Igbo man must be President come 2023. Those who are supporting Bola Tinubu and former President Goodluck Jonathan and Atiku Abubakar want to break Nigeria up.” According to him, rotational Presidency should start with Igbo ethnic nation.