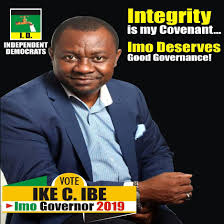 in his keynote address at a conference organised by South East 2023 Presidential Mandate in Enugu, Ibe who was also governorship aspirant on the platform of the All Progressives Grand Alliance (APGA) during the 2019 general elections, added that allowing the South East to produce President Muhammadu Buhari’s successor would advance the unity, even development, economic growth, stability progress.

He argued that since independence, the Igbo nation had continued to struggle for political identity and relevance, stating: “Until South Eastern leaders come together and genuinely work for a common goal, the quest for a Nigerian president of Igbo extraction will once again elude them in 2023.”

The lawyer regretted that “this region has suffered marginalisation in every way possible. We have for long been subjected to all kinds of unpardonable wrongs in a nation which our heroes past fought for its liberation from colonialism.”

Igboayaka implored the Imo East representative “to make good use of his time ahead of 2023 to reconcile with all political factors and become an ambassador of peace in Igbo land.”

He claimed: “It is unreasonable and unacceptable for Okorocha to be pulling the strings and pushing Mr. Chidi Ibe to be distracting the whole Igbo race on his purported election and reckless press releases parading himself as President General of Ohanaeze Ndigbo.

Similarly, Ohanaeze Youth Council (OYC) has urged former state government, Rochas Okorocha, to encourage harmony in Ohanaeze Ndigbo. Its national president, Comrade Igboayaka O. Igboayaka, who made the call in a statement in Owerri, charged Okocha not to engage in acts that could endanger his political ambition in 2023.

He said: “Senator Okorocha should be reminded that the task ahead of Ndigbo is working towards the emergence of a Nigerian president of Igbo extraction, which he has indicated interest.

“And dabbling in Ohanaeze politics and causing a crisis in Alaigbo may raise doubt in the minds of Ndigbo and Nigerians over his presidential ambition.”

He claimed: “It is unreasonable and unacceptable for Okorocha to be pulling the strings and pushing Mr. Chidi Ibe to be distracting the whole Igbo race on his purported election and reckless press releases parading himself as President General of Ohanaeze Ndigbo.

“The crux of the matter has ended in Prof. George Obiozor’s emergence as PG in the election held on 10th January 10, 2021 in Owerri. Therefore every progressive and reasonable Igbo person should drop his or her grievance and work with Prof. Obiozor for the overall interest of Ndigbo.”

OYC helmsman added: “Anyone who refuses to join forces with Obiozor to make Alaigbo politically and economically viable must have a selfish interest. And such a person must be resisted by Igbo youths across the globe.

“Fundamentally anyone, who loves Alaigbo, shouldn’t have hand in fuelling crisis or make Alaigbo a war zone, but should diplomatically aid in maintaining a peaceful atmosphere through dialogue, negotiation, and reconciliation.

“No one’s interest can override the general interest of Ndigbo. Prof. Obiozor has adopted negotiation, reconciliation, dialogue, and workable tools to build a new Igbo society. This should be embraced by all progressive and patriotic Igbo groups and leaders.”