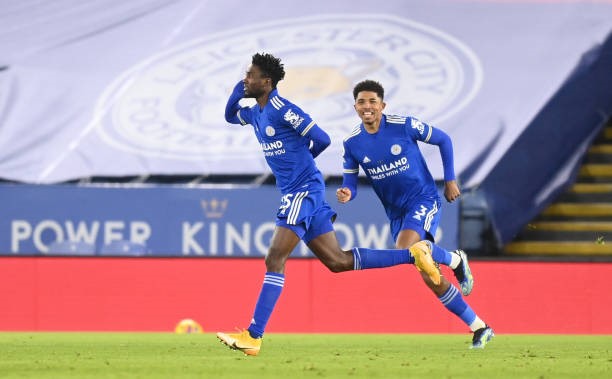 Super Eagles midfielder Wilfred Ndidi says he is delighted to get his first Premier League goal of the season for Leicester City in the win over Chelsea.

Ndidi found the back of the net as the Foxes defeated Chelsea 2 – 0 to move to the top of the premier league table on Tuesday.

Ndidi struck a sweet volley with his left foot to beat Mendy in goal for Chelsea before James Maddison added the second minutes later.

“If I count, [I’ve scored] maybe four or so, with my left foot!” Ndidi said when questioned about his effectiveness in front of goal.”He told Leicester City’s TV after the game.

“It comes once in a while, but I just keep trying, you know! It was really good. It lifted the team.”

The Foxes dominated the game and should have added more goals in the second half, but Edouard Mendy denied Youri Tielemans and Marc Albrighton.

When asked if was the best home performance from the players, Ndidi has this to say: “As a team, we want the points. We want to play and get the points. So, I just feel it’s one of these games that we really did good, but there’s still more to learn and hopefully better games coming our way.

“It’s very exciting and we feel very happy because it’s part of the season, and there are more games to come.