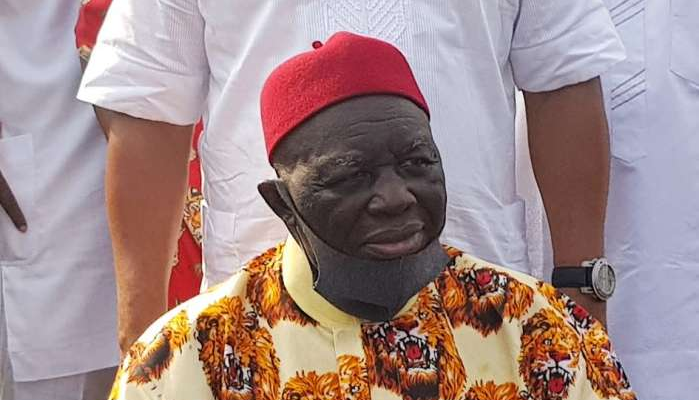 The newly-elected President-General of Ohanaeze Ndigbo, Prof. George Obiozor, has listed security and education as well as guaranteeing a robust economic growth for the Igbo people as some of the immediate priorities of the socio-cultural organisation.

Speaking during a recent world press conference in Enugu, the ex-Nigerian ambassador to the United States of America and Israel as well as the country’s high commissioner to Cyprus, noted that as it is, the Igbo people have become the most vulnerable even at the slightest crisis in any part of Nigeria.

The former Director General of the Nigerian Institute of International Affairs (NIIA) argued that although the Igbo people were not at war with any part of the country, a permanent solution to incessant attacks on people from that part of the country must be sought.

Obiozor noted that to achieve these, the leadership of Ndigbo must transcend partisan politics, make-believe, rhetoric, propaganda and shadow-boxing, stating that the Igbo interest must be prime, as opposed to self-seeking agenda and mere political ambition.

He reiterated that his decision to contest for the office of president-general of Ohanaeze Ndigbo worldwide was not a decision based on self aggrandisement, personal ambition or self-promotion.

The coordinator and head of the secretariat of south east delegates during the 2014 national conference lamented that for far too long Ndigbo had been objects of stereotype and profiling, which ended in being misunderstood
and misrepresented in national politics, business and academia.

Obiozor maintained that from all indications, Nigeria was in dire need of restructuring, stating that whatever options are chosen, ethnic nationalities in Nigeria will sooner or later go into negotiations or debate over the future of the country, a development the Igbo people must be prepared for.

He explained that although Igbo people seek unity, it should not be unity of slaves and masters, while the peace it yearns for should not be that of the graveyard.

“The most urgent and imperative need of Ndigbo today is security. The security of Ndigbo in Nigeria and beyond has become a compelling primary responsibility and of serious concern for Ndigbo. At home in Nigeria the story of insecurity of Ndigbo has reached incrementally dangerous level of existential threat.

“Ndigbo are indeed in terms of security, the most vulnerable and victims of violence throughout Nigeria. They are the most exposed to physical violence, attack and destruction of their houses or properties at the slightest crisis in any part of Nigeria.

“ In fact, this ‘victim syndrome’, vulnerability and insecurity has gone beyond our shores, in Ghana, South Africa etc. There must be a solution to security problems of Ndigbo at home and abroad.

“There are ways of doing this and there are certainly Ndigbo who are capable of either helping to ‘contain’ the propensity towards violence against Ndigbo or persuading the appropriate authorities to do so. In matters of this nature, knowledgeable leadership is ‘’sine qua non’’-a necessity,” he stated.

On the economy, he argued that in all the criticism of Ndigbo, nobody and no group had ever accused Ndigbo of laziness, noting that on the alternative, Igbo people have been associated with economic and business ingenuity.

“However, this too has had mixed response of praise, jealousy and envy. And also, the economic success associated with Ndigbo has always been individual achievements and successes.

“Hopefully, this is a new era of prosperity for Ndigbo as collective efforts are on to start with the laudable initiative of Ohanaeze Ndigbo , in terms of the Alaigbo Stabilisation Fund. This is definitely going to enhance and promote the ‘’Aku Ruo Ulo’’ dictum currently also promoted by Ohanaeze Ndigbo and other stakeholders.

“We must take the idea of building up the economic and industrial base of Alaigbo as a priority. Indeed, in general analysis, Ndigbo has in comparison to other parts of Nigeria had successful economic managers and entrepreneurs.

“Thus, we must encourage, support and advance the course of domestic and foreign investment in Igboland. We will and we must always be happy to know that what others deny us we can do for ourselves,” he added.