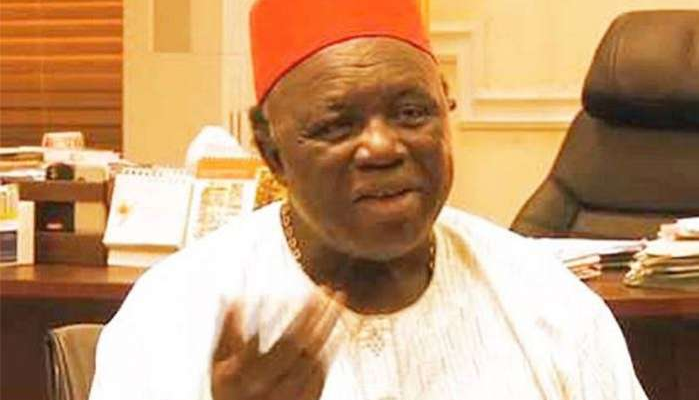 The newly elected President-General of Ohaneze Ndi Igbo, Prof George Obiozor has admonished the leader of the proscribed Indigenous People of Biafra (IPOB), Nnamdi Kanu to thread cautiously his agitation for a separate country from Nigeria.

Speaking at his maiden press conference in Enugu on Wednesday, barely two weeks after his election, Obiozor said the Igbo Nation is not at war with Nigeria.

“The Igbo nation is not at war with Nigeria and has nothing pending before any institutional authority that demands a separate existence from Nigeria”, the former Nigeria’s Ambassador to United States and Israel said.

According to him, “Nnamdi Kanu is one of us and he must listen to some of us for several reasons. The fact and reality are that the issues of Biafra are above and beyond his capacity to decide. He must listen because he is one of us and we are all in this dilemma together. And our mutual and collective responsibilities are sacred and must be respected”.

Consequently, the Igbo leader has warned that “all actions or utterances that put Ndigbo in ‘’present and imminent danger’’ or ‘’harm’s way’’ must be avoided”.

He noted that a statement credited to the leader of the defunct Biafra Chukwuemeka Odumegwu Ojukwu that “the bones shall rise again”, is being misconstrued, adding that “He (Ojukwu ) didn’t mean conflict, violence and war”.

Obiozor said, “Definitely the bones have arisen, re-incarnated or resurrected but in Ojukwu’s idea the mission is creative and constructive. Ndigbo are builders and not nation wreckers/destroyers.

“Ojukwu meant the return of the “’Can do ‘’spirit of Ndigbo that turns ‘’difficulties into dividends ‘’ and obstacles into opportunities. Therefore in this context and in the spirit of the times and collective interest of Ndigbo , I appeal to our son Nnamdi Kanu,‘’ act well your part for there your honour lies ‘’.

The President General appealed to Ndigbo to believe that, “we can have our people fairly united again, not really as Igbo state union days, but somehow closer. Many things unite us but we have given few things that divide us priority”.

Continuing, he said, “That is our main problem and that can also change. But we must also once again ‘’invent’’ a well-defined common cause and a common sense of direction. Therefore, there are huge tasks ahead of us and work that must be done urgently.

“We therefore call on all Igbo Diasporans to join hands with us to bring about the accelerated development of Alaigbo. Principally, the goal of this administration is aggregating our individual successes into common action that will lead to a collective success.

Nothing unites a people more quickly than prospects for success and with a well-known Igbo spirit, this seemingly difficult task can be done” he added.